I flew into Schipol Airport via Frankfurt, Lufthansa being my airline of choice these days. Technically, I didn't hit the ground in Germany - being in transit only - but as the first Schengen country I entered, my passport was stamped there, so I've added it to the list of countries visited. A small cheat, but who's counting? :-)

The funniest thing that happened was the German immigration officer looking at my Canadian passport and asking if I lived in Italy (I was born in Milano). Seriously, dude...if I lived in Italy, wouldn't I have flashed an Italian passport and wouldn't I have been in the line for Schengen citizens?
Flying into Amsterdam was short and brisk, other than having to check in my second piece of hand luggage because the flight was "full". That completely defeated the purpose of my taking carry-on luggage only and forced me to wait an extra half hour at Schipol. Oh well - I was too excited about the trip to care about something that trivial.
I picked up this gorgeous Fiat 500 at Schipol. I didn't name "Claudia" until I hit a moment of inspiration while journeying through the Alps later that week, but she does look like a "Claudia", doesn't she? :-) 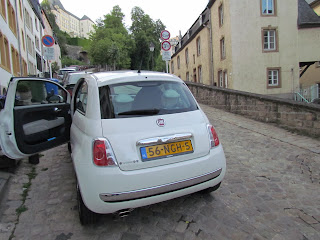 Between Claudia and Alex, my trusty GPS, not to mention my pre-planned maps and routes, I was ready to hit the road.
First stop was Luxembourg, via Belgium. The drive there was very nice - in a countryside fashion. Lots of cows and farms, and of course, lots of windmills, especially in the Netherlands and northern Belgium. Luxembourg is a wondrous creation - the old city is built almost entirely within high walls (see below), most of the people speak Luxembourgish, German, French (and some English) and they are VERY multicultural. I had a very interesting broken French conversation with an African lady who looked and dressed like she was in her tiny French West African hamlet...which just seemed strange for one of the financial centers of Europe. 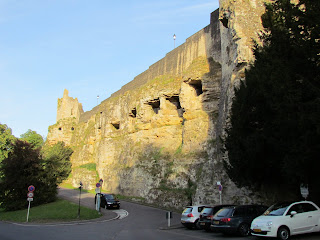 I got in around 6pm and spent most of the evening - till nigh on 11pm - walking around the old town, taking pictures and making myself (and Claudia) a general nuisance with my basic French and Nigerian-Canadian enthusiasm. 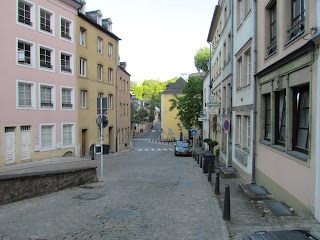 I also had this traditional Luxembourgish dinner at Mousel Cantine - roast pig's thigh with sauerkraut, green beans in gravy, farmer's bread and sliced roast potatoes. Washed down with pineapple juice, it was just what the doctor ordered. 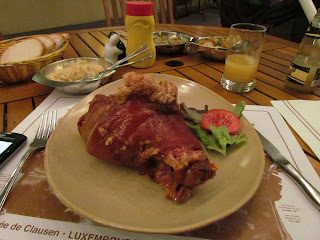 All in all, I had a great time in Luxembourg...I took more pictures and sight-saw more than I thought I'd be able to. Importantly, I discovered that I could actually hold basic conversations in French and even some German. Good news, considering that all my future destinations would be in French-speaking locales.
Daily Summary - 425km traveled, 4 countries visited (Germany, Netherlands, Belgium, Luxembourg)
Posted by Black Thought Reformer at 12:54 AM